DO NOT PATRONIZE TEXAS ROADHOUSE

The first banner went up two weeks ago at the Texas Roadhouse at 806 Arnold Commons Drive in Arnold. The franchise has hired Spiegelglass Construction Co., of Maryland Heights, MO, to build an addition to the restaurant.

Spiegelglass is using Miller & Miller Masonry of Imperial, MO. – a company that pays below the area standard wages and benefits established by Local 1 – for brickwork on the addition.

Taking the message to the public (in the photo above) are Local 1’s Dennis Gallagher (left) and Jay Thomas.

DO NOT PATRONIZE AUTOZONE 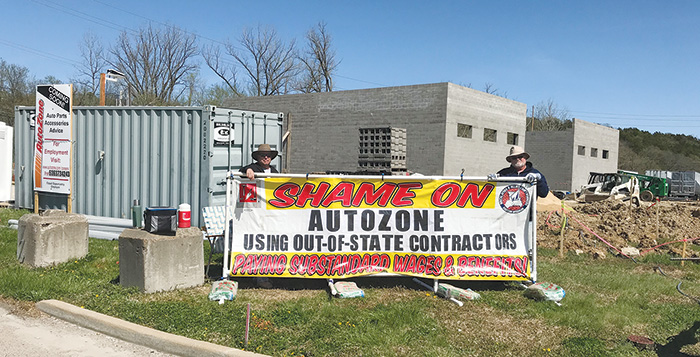 The second banner went up last week at the new AutoZone being built at 1704 Catlin Dr. in Barnhart. Ohio-based general contractor Dalo Construction is using a non-union Ohio subcontractor – Reliant Masonry – another company that pays below the area standard wages and benefits established by Local 1 – for brickwork.

In the photo above, Tilesetters Local 18’s Steve Hanlon (left) and Ricard Hanlon manned the banner alerting the public the company is using a non-union, out-of-state subcontractor for masonry work.

Walker said Local 1 plans to handbill and banner again at Barnhart AutoZone once the business opens.