Amid the divisiveness of this year’s legislative session and partisanship of this year’s election cycle, the St. Louis Building & Construction Trades Council demonstrated the power of building bridges at its Third Annual Leadership Awards dinner Feb. 20.

Jeff Aboussie, executive secretary/treasurer of the Building Trades Council, called the honorees “emblematic of what the Building Trades, and our entire Labor Movement, has grown into: a convergence of our unions with our business leaders, our construction company partners and our government leaders — a coming together to make our community and our state a better place to live, to work, to raise a family.”

The Building Trades are working to do that, Aboussie said, through the commitment of its affiliated unions to apprenticeship and training programs, and pre-apprenticeship efforts such as the BUD (Building Union Diversity) program.

Koster has served as a Cass County prosecutor, a Missouri state senator and three-term Missouri attorney general, consistently defending the rights of working families, fighting for fairness and against powerful interests preying on Missourians and doing what’s necessary to ensure fair justice for all.

Twice elected to serve as attorney general for the state of Missouri, Koster has governed the way he promised: delivering justice to those who break our laws, defending working families, and fighting against powerful interests that have done wrong to the people of Missouri.

“There is a tension in our state that we haven’t seen for 50 years, and it’s never been more important than now to unite,” Koster said. “The pre-apprenticeship programs show great effort.

“I plan to bring as much resources as lawfully possible to create jobs,” he said. “It may only be 300 to 400 jobs a year, but I want to make Missouri a Top 10 business state.

The St. Louis Regional Chamber is an inclusive organization ensuring all aspects of our community, including Organized Labor, are involved in its decision making processes. It’s commitment to our community, to our workforces and to our businesses is unparalleled.

Economic prosperity for the regional community – including jobs, income, education, population, economic mobility and company growth – is its uniting cause. The Chamber believes the entire St. Louis bi-state region needs to build and invest in the infrastructure we need to be competitive in the global economy and provide well-paying, skilled jobs now.

Joe Reagan, president and CEO of the St. Louis Regional Chamber, personally thanked Aboussie for being “a true bridge builder for all of St. Louis.”

“Our purpose is to inspire a greater St. Louis,” Reagan said. “When we hear phrase, a picture emerges in our minds and in our hearts. Whatever those pictures are, we know that if our conversations are about what a greater St Louis looks like, we will learn there’s more that unites us than divides us. We know we will win.” 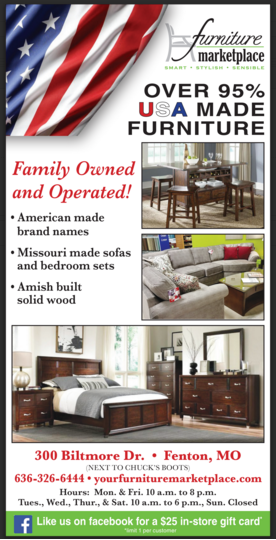 The members of the St. Louis Building Trades unions have skills that are in demand, Aboussie said.

“When one project is completed, there’s another one waiting. If it’s not here, St. Louis-trained craftsmen are welcomed anywhere in the United States because there are few training programs like ours that turn out the highly skilled construction workers like our unions do in St. Louis.”

That skill is not an accident. Missouri’s Building Trades unions spend more than $40 million annually in training programs – money paid by union members as an investment in their own futures, and the future of their crafts.

“This is who the St. Louis Building Trades are in 2016,” Aboussie said. “Today, our outstanding construction companies, recognizing the value our workers bring to them in terms of productivity, are able to bid projects knowing they will come in on time and often under budget. That makes owners buying, or expanding buildings very happy.”

The proof can be found in projects such as Busch Stadium, Ameren Missouri’s power generating stations, the massive IKEA retail store, the current Boeing plant expansion, and the many multi-family housing projects built by quality contractors like Holland Construction.

“We work with the Regional Chamber and others businesses to ensure that we too bring value to the table when our community makes major efforts to grow,” Aboussie said.

Looking to the future, the St. Louis trades’ BUD program – Building Union Diversity – is helping bring qualified minority workers and women into union apprenticeship programs to give them the skills for life-long careers.

Photos from the evening’s festivities: