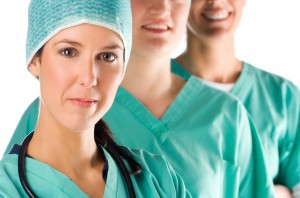 They are he second St. Louis hospital RNs this month to affiliate with the 175,000-member National Nurses United (NNU), the largest union and professional association of RNs in the U.S.

At Des Peres, the RNs voted 110 to 60, a 65 percent margin, to join NNOC-Missouri on June 22. The secret ballot election was conducted by the National Labor Relations Board. NNOC-Missouri will represent 250 RNs at the hospital.

Like the SLUH election, the Des Peres vote is expected to give NNOC-Missouri/NNU added momentum in winning further breakthroughs for nurses and patients in the region.

“For more than 25 years it has been a dream of mine to see nurses in St. Louis, my home town, come together and form a united front for RN standards and patient safety.  Two down!,” said NNU Executive Director Rose Ann DeMoro.

Des Peres nurses say they are looking forward to strengthening their collective voice to advocate for high quality patient care and to improve RN standards at the hospital.

“We are thrilled that Des Peres RNs and SLUH RNs both won our right to collectively bargain,” Marilyn Strain another Des Peres RN said. “Working together, we will negotiate for improved patient care, salaries, and benefits that can recruit and retain the best nurses for the best patients in St. Louis.”

Des Peres, like SLUH, is a part of Tenet Healthcare one of the largest hospital systems in the U.S.  Overall, NNU affiliates now represent nearly 5,000 RNs at 11 Tenet hospitals in four states, Florida, Texas, California, and Missouri.

Since its founding two and a half years ago, NNU has organized more than 30 hospitals and 13,000 RNs in 10 states.

This has been a big month for NNOC-Missouri in the state.  The latest election comes just days after nurses at Research Medical Center (RMC) in Kansas City, who are part of the HCA hospital system announced a contract settlement that strengthens the voices of RNs in patient care issues, improves staffing standards and offers economic incentives that recruit and retain quality RNs.

“When RNs stick together for quality patient care and our professional practice, it is a win for everyone – patients, nurses, our hospital, and the community,” said Research RN Cathy Stephenson.