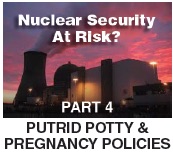 And these are the more “refined” words two female security officers working at Ameren Missouri’s nuclear facilities here use to describe the bathroom facilities/conditions they have to suffer through when on 12-hour shifts and they need to relieve themselves.

And it’s no better for women facing pregnancy, another security guard made clear.

“Ameren tells the community what a great company they are; they give away fans and help build homes, but the don’t take care of their own employees. It’s an embarrassment,” says Laura Lowe, a single mother of three forced onto food stamps after the company reneged on her supervisor’s assurance that she would still draw her paycheck after childbirth.

In exclusive interviews with the Labor Tribune, two of the three women interviewed asked that their names be withheld because they would be fired for speaking the truth. “Retaliation” is the way one officer put it bluntly.

Lowe, however, is only one of two women on pregnancy leave so her identity would not be easy to mask. After the Labor Tribune consulted with the union’s legal counsel, it was agreed that her name could be revealed.

All three women were very straightforward about their experiences at the Callaway plant. It’s not a pretty picture! 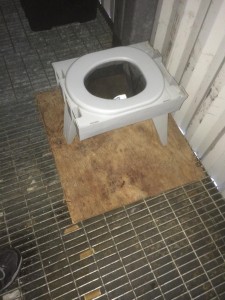 “Ameren is a Fortune 500 company and we’re reduced to using toilet solutions found in Third World countries,” one security officer said with resentment in her voice.

There appear to be two different circumstances that the security officers work in:

Because of security considerations, the women couldn’t discuss specific details, but they both had similar experiences.

NO TOILETS AT ALL

For women working in an area where there are NO toilets at all, they have several options:

In all instances, there is NO privacy. And there’s no place to wash your hands, as there’s no running water.

“It’s disgusting. Humiliating,” one female security officer said. “There’s no privacy. Everyone knows what you’re doing. And if it’s that time of the month that every woman goes through, it’s even worse!”

And it gets worse: The campstools are now kept in a box because the female officers complained that they were filthy as they were previously left out in the open. But before a stool can be used, you have to call a supervisor to get permission to use the “toilet.”

FORCED TO SOIL HER PANTS

To make it even worse, the women said the campstools are not available everywhere for easy access. One said she personally wet her pants, as have other women unable to reach a campstool in time or get authorization in time by a supervisor.

Another said during her menstrual cycle, she had more than a half dozen accidents since toilets were not quickly available.

“You have to then go home and change. The supervisors laugh and make jokes. To us, it’s no laughing matter!”

The campstools were Ameren’s solution as a “temporary fix” after so many complaints were filed for years. They’ve been in place for the past five years.

“A Third World country solution. And they’re always threatening us that if we keep complaining, they’ll take the campstools away. We’re still complaining.”

In other areas, there are three restrooms with flush toilets… when they are working. Again, these facilities are spread out over a several mile area.

Problem is, they are often broken or often there’s no running water.

In the latter case, they ran a hose into the toilet to provide running water for some flush capability. That is, when there’s water on the site. Often the water is shut down. When this happens, they can only pee, nothing else.

In the former case, where the toilet is broken, they’ll often bring in Johnny-on-the-Spots. In one instance, the temporary toilet has been broken for three months, and it’s still not working despite all the complaints, the Labor Tribune was told.

“You would think they would make fixing the toilets a priority, but not so.”

Oh yes, the women share the toilets with hundreds of men. There are no separate male/female toilets.

“It’s pretty disgusting. Not only are the toilets filthy because whoever is cleaning them doesn’t do it regularly or when they do, it’s spotty at best; we have to remove a lot of gear in that nasty john. It’s a lot to handle,” the second female security officer said.

“When there’s no water, you can’t wash your hands so most everyone carries hand sanitizer, and yes, wipes as well.

“They treat security officers like second class citizens. You can bet the control room guys don’t go through this.”

She carries a large bottle of disinfectant. “I’ve had to use it more often that I like.”

AMEREN TO UNION:
‘HIT THE BRICKS’

With Ameren now refuses to re-enter negotiations on the basis that having given the union its “last, best and final offer” it won’t re-enter talks despite a tentative agreement’s overwhelming 87.5 percent rejection. Ameren states it would set a dangerous precedent for future negotiations with three other unions in the nuclear facility.

One company negotiator went so far as to tell the union that if they didn’t like it, they could “hit the bricks,” a taunt the official probably thought was “cute” but in reality is now being considered by the local.

Callaway Nuclear Power Plant, Fulton, Mo – A nuclear security officer here almost lost her home, and had to go on food stamps and the state’s WIC child aid program in order to feed her family after Ameren Missouri reneged on its commitment that she could accept vacation donations from her fellow workers when she had her third baby.

“Except for friends coming to my rescue with loans, I stood to lose my car and my house,” security officer Laura Lowe told the Labor Tribune.

Before the baby was born, the other pregnant officer checked with her supervisor to make sure she would be able to accept vacation donations from others to tide her over during her pregnancy. She was told unequivocally that was ok. The supervisor said he checked with Ameren’s HR department to be sure. “You’re covered” until you come back, she was told. Lowe was then called by the same supervisor and told she too would also be allowed to accept vacation donations.

Vacation donations are transferred in cash. When someone donates vacation time to a fellow worker, Ameren transfers the cash equivalent of the recipient’s pay scale into their bank account.

“As a single mom with three children, I can’t go without a paycheck,” Lowe said in an anguished voice. “Had they told me earlier, I could have somehow tried to get prepared.

“I know others who have gotten vacation donations of time from their fellow officers for adoptions, for going to visit a sick friend.”

As a result of this treatment, she has filed a complaint with the Missouri Commission on Human Rights.

“I can’t believe this multi-billion dollar company would do this to me and my children. It’s apparently not a big deal for them, but it’s a disaster for me,” she stressed.

“My hands are tied. Because of the new baby, my young children and my own health after a very difficult pregnancy, I can’t get a different part-time job to bring in some money to survive. If I could work part-time, I’d want to go back to Callaway. Without my family, friends and fellow co-workers helping, I don’t know where I’d be right now.

“It’s clear Ameren doesn’t care about its security officers. They treat our department like stepchildren; we’re treated like a subcontractor group rather than part of Ameren, doing only what the government says they have to do for us.

“Ameren tells the community what a great company they are, they donate fans to the needy in summer and help build homes for underprivileged, but they don’t take care of their own employees. It’s an embarrassment.

“I’m proud that I can take care of my family and myself. I work overtime. I’m never late. It hurts my pride to have to ask my mom and friends for help, but there was little choice,” Lowe concluded with sadness in her voice on the verge of tears.

Lowe expressed another concern: being fired for financial difficulties that Ameren has created for her.

After being off work for more than 30 days, it’s the company’s policy that a security officer must be “re-badged.” That means a thorough review of all relevant background data including finances.

Security officers go through a rigorous background check at regular intervals that includes an extensive financial review to ensure there’s nothing there that could subject them to blackmail thus potentially jeopardizing the plant’s security if a security officer was trying to hide something. That’s an understandable precaution on Ameren’s part.

Because she had some early trouble meeting timely payment of bills and almost lost her home and car, which impacts her credit rating because she had no money until family and friends came to her rescue, Lowe said she was concerned with that information coming up on the security review and then being used as an excuse to not re-badge her. This would prevent her from doing sensitive area security officer work, especially now that she’s filed a formal complaint with the State and is now talking to a reporter.

However, at the end of her first day back on Dec. 7 she was re-issued her badge.

“It was bizarre,” she said. “Usually it takes one to two weeks; they re-badged me on the first day. Apparently because the company has been “sensitized” as a result of the Labor Tribune’s articles, she added.