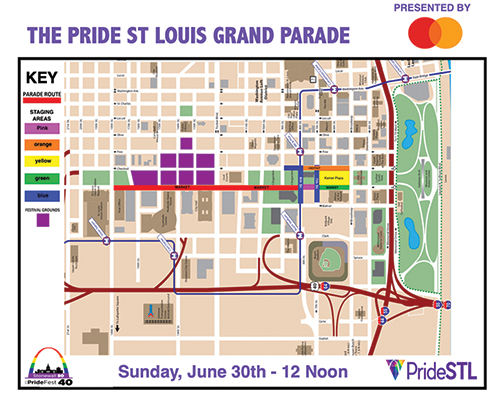 Join your union brothers and sisters at the Grand Pride Parade in downtown St. Louis this Sunday, June 30, by marching with one of four Labor groups to remind the public that unions can provide all workers an equal voice on the job.

The Grand Pride Parade is part of this year’s PrideFest St. Louis, the annual celebration of LGBTQ pride and equality. The parade begins at noon at the corner of Market and 8th streets. The four Labor groups participating include:

Parade lineups are not announced until shortly before the event. For additional information on where the Labor groups will be on Sunday, follow them on Facebook at facebook.com/MOAFLCIO, facebook.com/UFCW655, facebook.com/MissouriMOWIT or facebook.com/Unite-Here-Local-74-1937815806461481/.

Celebrating 25 years of Pride At Work

Pride At Work, the AFL-CIO constituency group that represents LGBTQ union members and their allies is celebrating 25 years of progress.
• Lee Saunders, President of AFSCME: Under President Saunders’ leadership, AFSCME has grown and strengthened an already powerful relationship with Pride At Work. Last year, AFSCME became the first union in the country to call for a nationwide ban on so-called conversion therapy.
• Shane Larson, former Co-President of P@W (CWA): Shane Larson has been an integral part of Pride At Work, leaving an impact on the organization that will be felt for years to come. He has held a range of positions, including serving two terms as co-president, first with Lori Pelletier (IAM) and then with Shellea Allen (SAG-AFTRA).
• Lambda Legal Staff Union (WBNG Local 32035, TNG-CWA): The staff members at Lambda Legal are no strangers to the fight for justice and fairness. So when they decided to join together and organize with the Washington-Baltimore News Guild, they were ready to fight. Though management didn’t voluntarily recognize their union, workers won their election and secured their first tentative agreement just this month.