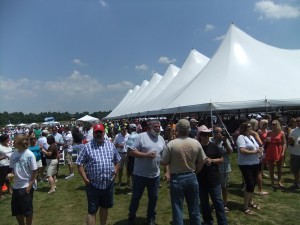 North County – It was a picnic on June 9 to end all picnics and worthy of the event it was celebrating – the 100th Anniversary of Plumbers & Pipefitters Local 562 held at the union’s headquarters/training complex on Larimore Rd.

The picnic highlighted a three-pronged celebration that ended with the gala members and families and friends picnic, the groundbreaking for a new $12 million training facility and the issuance of an historical anniversary brochure telling of the union’s proud history.

The day’s activities focused on the local’s members and their families. With lots of food and libations for young and old alike in huge covered tents, there were water slides, pony rides, rock climbing walls, live snakes to be held, game booths for the kids where no one left without a prize, caricature artists, snow cones, ice cream galore, a family photo booth, and much, much more.

“It’s all about the families and the men and women all along the way that have helped our union grow,” said Business Manager John O’Mara in opening the event on a massive sound stage where a rock bank played all day.

To memorialize the singular accomplishment, the top political leadership from the local, state and national levels were on hand to congratulate Local 562’s members and leadership. Among them speaking were:

• Rick Terven, executive vice president of the United Association, speaking on behalf of UA General President William Hite, unable to attend because he was recuperating from an illness, told the audience, “Successful local unions don’t happen by accident…they happen through the hard work and dedication of their members and officers.”

He made the point that Local 562 has been blessed with a cadre of outstanding officers providing leadership over the generations, and a membership who has been progressive and willing to look to the future.

“Past and present officers here have done an excellent job of creating a local union that is a powerful force in Missouri, a local that is clearly ready for the future. This can only be accomplished by having a membership that stands behind its local union.”

“Everyone – past and present – should be proud of what you accomplished,” he emphasized.

• Senator Claire McCaskill, running for re-election in November, asked the crowd of thousands to “Think about your family, how hard you’ve worked to earn a living, put a roof over your head, put your kids through college. That’s all at stake.”

She said that in a recent interview, her three opponents in November were asked what the minimum wage was in Missouri. None of them knew. “But what they all admitted, what they did know, was that it was too high!” Boos echoed through the crowd.

“That’s all you need to know about how important this Senate race is,” she said. “Talk to your family, talk to your friends. Tell them we need to send Claire McCaskill back to the Senate.

• Governor Jay Nixon praised Local 562 for leading the way for the past 100 years, to create what union members now enjoy.

He said the results of the unions’ efforts over the years are clear. Nothing that Westinghouse recently announced that they would build modular nuclear plants here in Missouri, the governor said, “Westinghouse could go anywhere in the world to build, but they chose Missouri workers because they can build anything better than anywhere else, on time, in budget and with the best quality in the world.”

And he chalked it up to training, because “training matters,” pointing out that “Missouri has upped its training budgets by 50 percent to ensure we train the workers of the future.”

He noted too that when he ran, he promised Missouri would be a state where unions could grow because they would help the state’s economy grow. “I’m proud to tell you that we now have 41,000 more union members than when I was elected. It’s the second largest gain in union strength in the nation.”

And with that, the party began, and what a party it was.