The International Union of Machinists (IAM) will observe Workers’ Memorial Day virtually this year, due to the coronavirus pandemic.

Unions in the United States and Canada observe Workers’ Memorial Day to commemorate the thousands of workers killed, injured or sickened on the job each year.

The names of IAM members who have died on the job are memorialized with their name, lodge and date of death on a brick at the IAM’s Workers’ Memorial at William W. Winpisinger Education and Technology Center in Hollywood, Md. 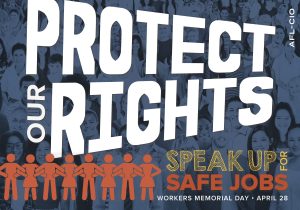 The IAM Workers Memorial was completed in 2001. It was dedicated to the remembrance of those who lost their lives while on the job. The bricks surrounding the Memorial bear the names of fallen members along with bricks donated from lodges and proud members of the IAMAW.

You can view this year’s special remembrance April 28 on: