Edwardsville, IL – Madison County Democratic leaders say the county’s Republican leadership, having failed to stem the spread of COVID-19, is throwing misleading advisory referendums on the November ballot to distract voters from their failure.

“The fact is, the Madison County Republicans have no accomplishments for the last four years and have nothing to run on for 2020, so they are crafting purely political sham referendums to try to distract voters from four years of failure and corruption,” said Randy Harris, the county Democratic chairman, director of the Laborers-Employers Cooperation and Education Trust (LECET) of the Laborers’ International Union (LiUNA!).

The Republican-controlled county board moved on July 15 toward placing two more referendums on the ballot. One asks if county retirees could also be paid by the county as an independent contractor or employee. The other proposes a state law change to stop automatic pay raises for legislators.

The board has already placed a referendum on the ballot placing a limit on a theoretical future tax increase – the infamous no-cut tax cut. Three is the limit for referendums.

COVID-19 FAILURES
Madison County reflects much of the nation lately in seeing an increased spread of the coronavirus as restaurants and retailers are opening up. The county reported 54 new cases, a new record, on July 13,  and a total was 92 new cases on July 13 and 14. The percentage of positive tests has also been climbing. 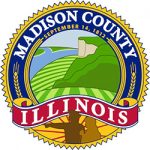 “Where are the Republicans’ plans to keep our county safe? What is this failed administration doing to ensure that we stop the spread of COVID-19?” Harris asked.

“Under Prenzler and his failed leadership, Madison County is becoming the laughingstock of southern Illinois,” he added. “Prenzler and the Republicans have failed all of us. They are playing politics when we need to be focused on stopping the spread of this disease.”

The non-binding referendum relating to county hiring was filed following the awarding of a $114,000 contract to Decker Analytics of Godfrey, owned by retired sheriff’s captain Eric Decker.