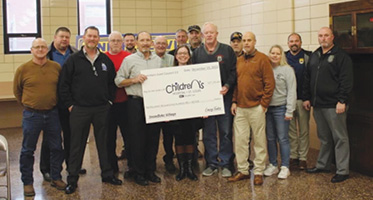 ST. LOUIS – Teamsters Joint Council 13 once again brought smiles to the faces of children hospitalized over the Christmas holiday by donating nearly $27,000 to St. Louis Children’s Hospital’s Snowflake Village program. Since 2014, the council has raised more than $177,000 for the program, which provides toys for children in the hospital on Christmas Day. Money raised for the program comes from the annual Joint Council 13 Charity Bass Tournament. Holding the check are Joint Council 13 President Larry Tinker (at left) and Secretary-Treasurer Ed Kimbrell (at right) presenting it to Hailey Cooper, who accepted the donation on behalf of the hospital, along with the other council executive board members. – Teamsters Joint Council 13 photo