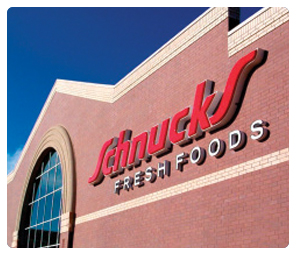 With $2.7 Billion in revenue, Schnuck seeks to boost profits ‘on backs of 234 loyal workers,’ Teamsters stress

Failing a miracle last-minute intervention, a boycott of all Schnucks Markets in Missouri and Southern Illinois will begin tomorrow, Friday June 17.

“If Schnucks is willing to turn their back on the middle class, then we should turn our backs on them,” said Teamsters Local 688 Chief Executive Officer Mike Goebel in a statement released today announcing the region-wide boycott to protest the heartless firing of 234 warehouse workers, 204 who are members of Local 688, outsourcing their jobs to lower wage scabs at a new warehouse Schnucks is opening this fall in North County.

“Schnucks has turned its back on its local workers, many of whom have given their entire working lives to the company, so we have little alternative but to call for a BOYCOTT of every Schnucks Market throughout the bi-state Missouri/Illinois region,” Goebel said.

As of last Friday, Local 688’s social media campaign had reached 387,924 people, and that’s even before an official boycott!

The Labor Tribune also learned that a last-minute effort was being made by UFCW Local 655 President David Cook, whose members work throughout the stores, to bring both sides together to try to find a resolution beneficial to both sides. But so far, there has been no indication if those efforts were successful.

“I am personally deeply saddened that a dispute between our allies at the Teamsters and Schnucks has come to this. I continue to urge both sides to seek a resolution that is fair for all,” Cook added.

Pointing out that Schnucks Markets is listed at #167 on the Forbes “America’s Largest Companies” list with revenues of $2.7 BILLION in fiscal year 2015, Goebel told the Labor Tribune that, “This is not a fiscal issue because the company is hurting, it’s strictly a greed issue. They see a chance to try to increase their profits on the backs of 234 loyal workers, workers who along with others in their company, have made them profitable in the first place.”

The opposite will happen, Goebel pointed out, as the boycott takes hold. Already thousands of people have already stopped shopping based on individual calls to boycott, calls documented by the Labor Tribune over the past several weeks based on social media posts. It is having its impact:

SCHNUCKS REFUSES TO HONOR ITS CONTRACT

Goebel added that after weeks of informational handbilling at Schnucks stores, the company has still refused to comply with its contract with Local 688.

The Teamsters contract says that if work is moved to a new facility, the warehouse workers have the right to be employed at the new facility. In a deceptive move, the company has tried to get individual workers to surrender their contractual right to reemployment. As a result, charges have been filed against Schnucks with the National Labor Relations Board.

Goebel repeated his willingness to meet with Todd Schnuck “at anytime for a heart-to- heart discussion over the future of 234 men and women who have helped to make this company what it is today, the people Schnuck now wants to throw out on the street.”