Home Health The Wuhan coronavirus; Should we be worried?

While the death toll for the new coronavirus has surpassed 130 people in China and put the world on edge, it does not appear to be spreading in the U.S., health officials said in a news conference last week.

“At this time, in the U.S., the virus is not spreading in the community,” said Dr. Nancy Messonnier, director of the National Center for Immunization and Respiratory Diseases (part of the Centers for Disease Control and Prevention). “For that reason we continue to believe that the immediate health risk from the new virus to the general public is low at this time.”

Dr. Randall Williams, director of Missouri’s DHSS, said, “While this public health situation is worrisome, we are encouraged by the proactive measures taken by the CDC.

“The CDC tells us that the immediate health risk from 2019-nCoV to the general American public continues to be low at this time. We want to make sure Missourians – patients and doctors – are aware of this issue to avoid any local transmission of the virus.” 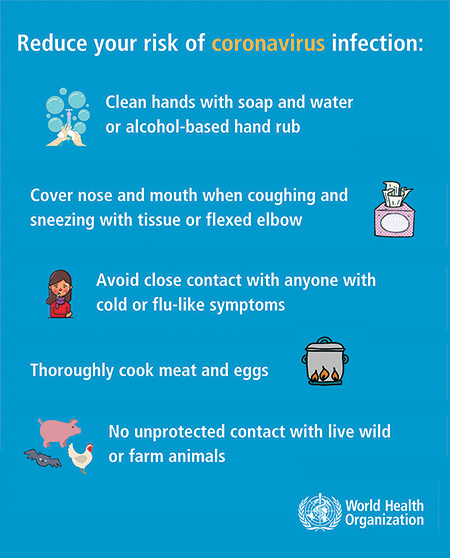 When person-to-person spread has occurred with SARS and MERS, it is thought to happen via respiratory droplets with close contacts, similar to how influenza and other respiratory pathogens spread.

While considered a severe illness, other patients have had milder illness and been discharged.

The confirmation that some limited person-to-person spread with this virus is occurring in Asia raises the level of concern about this virus, but CDC continues to believe the risk of 2019-nCoV to the American public at large remains low at this time.

WHAT ARE THE SYMPTOMS?
Symptoms of coronavirus may include:

WHAT IS THE TREATMENT?
There are no specific treatments for illnesses caused by human coronaviruses. Most people with common human coronavirus illness will recover on their own. However, you can do some things to relieve your symptoms, including:

HOW DOES IT SPREAD?
Scientists don’t know where the new virus came from. Some think it originated in animals, but testing so far has not confirmed a specific animal host. Analysis of the genome suggests it has only recently emerged in humans. It seems to be a respiratory virus, given the disease primarily involves the lungs, so it’s likely to spread through the same routes as colds and flu: sneezes and coughs propelling droplets into the air or onto hands that then touch other surfaces, or by touching our eyes, nose or mouth after contact with contaminated surfaces.

PROTECT YOURSELF
You can protect yourself in the same way as you would against other respiratory illness: by being vigilant about hand-washing and practicing good cough and sneeze etiquette, which means coughing or sneezing into your flexed elbow or into a tissue, and washing your hands.

The CDC is currently advising Americans to avoid non-essential travel to China’s Hubei province and Wuhan, which is the epicenter of the outbreak. Travelers to China, particularly older adults and those with underlying health problems, should discuss their travel plans with their health care providers.