Home Opinions U.S. mail is not for sale

The GOP has the same “solution” for pretty much every aspect of American life: privatize it.

That’s been their plan with Social Security. That’s their plan for Medicare. And now they’re at it again, in an attempt to privatize the U.S. Postal Service (USPS), which would dismantle a cornerstone of American life. 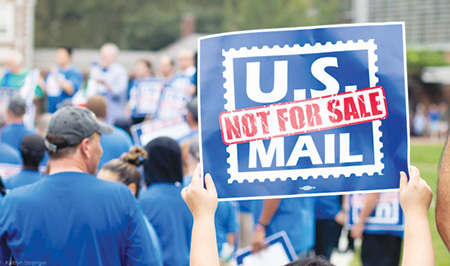 INTENTIONS ARE CLEAR
Donald Trump has made clear his intentions — announcing over a year ago proposals to privatize the USPS. And now, in the coming weeks, he’s expected to nominate a new Postmaster General to implement his plan of dismantling the Postal Service one piece at a time.

Article 1, Section 8 of the U.S. Constitution ensures that our government establish and maintain a Postal Service. And while we know Donald Trump pays little regard to the Constitution that he swore to defend, it’s up to us to protect aspects of American life that he and his administration threaten every day.

The U.S. Postal Service provides an invaluable service of weaving our country together—and we must make sure it is not sold off to the highest bidder.

Just like we didn’t stand to let Republicans turn over Social Security to Big Banks on Wall Street to manage as 401(k)s — we’re not going to let the GOP privatize our Postal Service.

DON’T BE TRICKED
The Trump administration’s effort to sell the U.S. Postal Service is basically a rerun of Republicans’ past failed efforts to privatize a litany of essential public services.

It has taken generations to build Social Security, Medicare, and Medicaid. But at each step of the way, Republicans scream “Socialism!” and try to frighten the American people about a “government takeover” of our lives. We won’t be tricked into allowing the government to sell off the Postal Service to private companies!

WRITE YOUR CONGRESSMAN
Write you congressman and demand that they reject the Trump administration’s effort to privatize our Postal Service. Demand they select a Postmaster General who understands the value of a robust national mail service.

The U.S. Postal Service is among the most popular federal agencies in our country. This public good, however, is at risk if we don’t act.
With Postmaster General Megan Brennan planning to step down next month, the opponents of the Postal Service are getting ready to make their move.

The Postmaster General has wide powers to shape the mission of the USPS and there is a real risk that Brennan’s successor could hand over parts of the service to private, profit-making corporations and prepare it for a wholesale sell-off.

Say NO to a privatizer as the Postmaster General.

Together, we will not allow the GOP and their allies on Wall Street to privatize our cherished public institutions.

(Social Security Works is the convening member of the Strengthen Social Security Coalition—made up of over 340 national and state organizations representing over 50 million Americans.)