Mail delivery to get even slower, but not postman’s fault 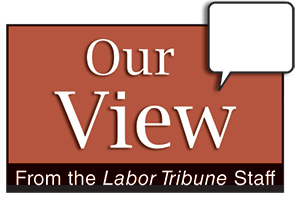 If you think you’re having trouble getting timely mail delivery now, here’s what Republican-appointed Postmaster General Louis DeJoy has in store for us:

• Slowing Periodicals publications like the Labor Tribune to six days from the current three days. In fact, right now we receive complaints that the paper is often delivered a week late and sometimes two issues come at the same time! All since DeJoy took the helm.

And the arrogance of the Postal Service Commission to this public tragedy? After more than 77,000 public comments opposing the current situation and calling for change, the Commission said: “The Postal Service has not demonstrated evidence to substantiate its claim that customer satisfaction will not be materially affected by the proposed changes.”

STRONG OPPOSITION
“We strongly opposed these proposals,” said American Postal Workers Union (APWU) President Mark Dimondstein. “The APWU calls on postal management and the Postal Board of Governors to reconsider their plans, and to ensure the people of the country received the prompt, reliable and efficient service promised under the law.”

“We oppose any change(s) … over protecting the public interest in maintaining dependable and affordable postal communications among all Americans,” the AFL-CIO said in a forceful resolution passed by the Executive Council.

Last June, the attorneys general of 20 states asked the U.S. Postal Regulatory Commission to reject plans to slow down some first-class deliveries, saying allowing that to happen could harm local governments’ ability to fulfill essential functions.

ADDING INSULT TO INJURY
Adding insult to injury, stamp costs increased Aug. 29 from 55 cents to 58 cents. “Pay more for worse service,” should be their tv ad’s new motto. “We deliver” is a joke.

All the change talk is about relieving the agency’s deficits caused by the Republican-mandated requirement that the Post Office pre-fund retiree health care benefits and pension liability for the next 75 years! Congress is considering a bill to eliminate this massively unfair requirement, but when, is the issue? It’s long overdue. Not a single business has such an outrageous requirement; none could survive with such a draconian demand.

IT’S NOT YOUR LETTER CARRIER’S FAULT
Just remember, don’t be mad at your mail carrier for your late mail. He/She is doing their best under very difficult circumstances that are way beyond their control.

In May, President Biden nominated, and the Senate approved, two Democrats and a voting-rights advocate to fill three of four board vacancies. The Democrats now hold a 5-to-4 majority with the votes to remove DeJoy, if desired.