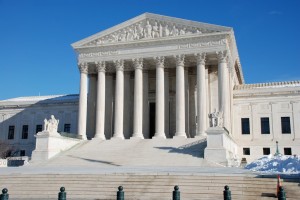 The case, brought by anti-union worker Martin Mulhall, is being backed and funded by the anti-worker National Right to Work Legal Defense Foundation. It pits UNITE HERE Local 355 against workers who – the case claims – objected to Hialeah Race Track’s agreement to those conditions during the union’s organizing drive there.  In return, the union joined the track in campaigning for a pro-casino referendum in Florida.

But the case stretches beyond one race track and one casino in Florida, UNITE HERE General Counsel Richard McCracken told reporters after the hour-long hearing before the High Court.

That’s because the federal appeals court in Atlanta, siding with Mulhall and the Right to Work group, had ruled that granting card check, neutrality and worksite access to the union were “things of value” to Local 355 – and to all unions – and labor law bars firms from giving unions “things of value.”   Doing so, the law says, is criminal.

The law in question is a clause in the 1947 Taft-Hartley Act  designed to keep employers from bribing unions with money, jobs, loans, or other inducements.

“No employer would think to bribe a union by making it easier for the union to organize,” UNITE HERE noted in a press release.

But judges on an 11th Circuit panel in Atlanta voted two to one that “organizing assistance can be a thing of value.” UNITE HERE appealed to the Supreme Court.

NOT ‘THINGS OF VALUE’

Other federal courts, and the National Labor Relations Board (NLRB), have ruled for decades that card check, access and neutrality are not “things of value” to the union, and are thus legal.

“Congress did not intend these three things to be read as ‘things of value,’” and thus illegal for companies to give unions under labor law, McCracken told the justices.  “Agreements by parties to set the ground rules for an organizing campaign are not ‘things of value.’,” he added.

“Reading the policies of the (National Labor Relations) act as a whole, voluntary recognition “of a union by a company “is not only permissible, but preferred,” McCracken then told Justice Stephen Breyer.  “The three procedures here are only useful under voluntary recognition…. And the agreement here doesn’t recognize the union.”

Justice Department attorney Michael Breeden, speaking for the NLRB and the Obama administration and siding with the union, rejected that – as well as Roberts’ argument that card-check is more coercive than an NLRB-run election.

“If a majority of the workforce wants to be organized and represented by that union, the argument here, as I understand it, is that this agreement taints that process by allowing the card check procedure that it has been argued exercises coercion against employees to support the union,” Roberts said.

“Well, this court in the Gissel Packing case many years ago rejected that argument,” Dreeben replied, citing a case that occurs in virtually every NLRB ruling.

“The contention that “card check agreements are inherently coercive has been rejected” both by other circuit courts and the NLRB itself, Dreeben said.

“Will you concede that they're more coercive than a secret ballot?” Roberts asked.

Dreeben said he didn’t think card check was any more inherently coercive than an employer on the factor floor reminding employees daily that they’re anti-union and that there are costs to joining a union.

“The process is one in which” the union and the company can go to the NLRB for an election, Dreeben said.  “But this court in Gissel Packing, backed up by decades of board law, has validated that card check agreements are perfectly legitimate and may facilitate the employees' free exercise of their choice to have a union.”

(Some information for this story from Labor Notes.)