Home Labor News From Our Region Threats, intimidation against worker-friendly Republicans in last-ditch effort to change their positions... 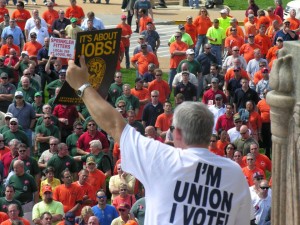 Veto override vote is Sept. 16: You need to contact your senator and state rep. NOW!

In the final two weeks before the Sept. 16 veto override session – and Republicans’ last chance to pass right-to-work in Missouri this year – the stepped-up pressure is becoming relentless on worker-friendly Republican senators and representatives who stood up for working families by voting “NO” on the bill and can prevent it from becoming law by sustaining Gov. Nixon’s veto.

Twenty-two Republicans and all 43 Democrats and one Independent stood up for working families and voted “NO” on the original bill in the House.

The Labor Tribune has learned from reliable sources that the pressure tactics have accelerated against many of those Republicans who believe, and understand, that right-to-work is WRONG for Missouri – Republicans who stood up for Missouri’s working families. Those new pressures include:

• Promises of major contributions to their campaign from “untraceable” multiple sources, large enough that personal fund raising efforts on their part can be minimal, even eliminated.

• Threats of putting up a “more favorable” (“pliable” or “buyable” or “easily manipulated”) Republican candidate against them in the August 2016 primary. For first term representatives and senators, who want to continue to serve their constituents, this is a major issue.

• Threatening to provide enough funding for a handpicked primary challenger to unseat the “uncooperative” (“honorable/brave/moral”) incumbent.

DOUBLING DOWN
ON THE ‘BIG LIE’

And to drive home that point to these worker-friendly Republicans, Americans For Prosperity (AFP), the Koch brothers radical conservative front group, has doubled down on their massive funding of efforts to encourage voters in their districts to pressure these worker-friendly Republicans (and yes, even some Democrats) to change their vote and support the override effort.

These efforts include spending millions of more dollars on outright deceptive and false TV and radio ads, direct mail and robo calls, and hiring people to hang Big Lie propaganda on residents’ doors in targeted districts.

According to studies of AFP’s pronouncements by the independent fact-checking PolitiFact, none of AFP’s literature or advertising merits a “true” rating. Their “facts” have been rated “Half Truth,” “Mostly False,” “False” and “Pants on Fire.”

If you haven’t called your state representative and senator yet, please do so quickly. It’s important that legislators for and against RTW hear from the people living in their districts.

Don’t know who your representative or senator is? Go to the homepage on this website. Click on the banner at the top of the page to be taken to the Missouri House or Senate home page. Put in your ZIP code at box at the bottom, left side under “Who is your Representative?” on the House page or “Legislator Lookup” on the Senate page. Your legislators’ names and contact information will pop up.

Your call or personal note to your senator and representative will let them know that Missouri’s working families have their backs.

Please, DO IT NOW.